It’s time to take your artificial halo down once more

You’re just an accomplice involved with the biggest legacy of animated theft, cultural degradation, and appropriation

Your followers are nothing but drones

The fact you do wrong, but never own up to it is beyond childish like the last on-screen boyfriend you had in 2019

Funny how you’re the type to flagellate a man for the smallest slight, but never own up to your faults when the fingers point your way

Some woman you are

This attempt at empowerment is lip service at best

While you are a different hue than your handlers, you’re nothing but a patsy buffer for a corrupt agenda

Real heroes and heroines don’t have your wealth and fame

The ones in the street, the ones raising awareness, and those raising money for righteous causes are more valiant than you will ever be

At least try to act like you care…oh, wait. You can’t act for crap.

Destiny should’ve disowned you a long time ago, you idol

Father, I hear your voice in the eastern sky
Mother, I hear you from the constellations
I will make you both proud in being the one true emperor
As I express myself in this human song,
I will right these misdeeds
I’ll still have unity with mankind and the wildlife in my kingdom
I’ve survived capsized ships, weapons, and bigger animals, and I’ll survive this

I hear the cries from Kinshasa, Toronto, Saitama, Grimes, Kigali, Kampala, Dodoma, and Nairobi
While I fight for peace and make sure my kingdom has dignity
I have to address the king who swindled me

You wouldn’t exist without me, but you’re so full of pride
(Japanese backup vocals: Kare wa honto shishi desu.)
(Swahili backup vocals: Ukweli unaishi ndani yake. Akawa ukweli!)
Like uncle, like nephew
You enjoy usurping the throne
Your gods had no worries
Profiting and suing others
For cultures they don’t own
Much like your father you dreamed of
Devastation and deceit
Have you seen a human before?
Have you found a way
To punish without genocide by starvation?
Shame on those humans who are allured
By your mate’s bedroom eyes
Was she your sister or your cousin?
You vagabond in denial
I never ran away when my parents died
Artifice flows through you
And permeates every time that you breathe
You tried blocking my existence
And denying it, too
You’re a false king
I’ll break your deception (X3)
Cause I’m the one true emperor

Copycats get no mercy!

I wasn’t originally planning on writing a song based on this anime when I was coming up with Dear Innovare. However, with everything I know and have learned last year with this and other cases, there was no way I could avoid talking about it especially when a good portion of this concept album involves plagiarism and theft cases. Also, there’s a contest that I have for the fun facts section if someone wants this song for free if they don’t have the album already.

If I could base songs on the Paprika/Inception controversy and the Battle Royale/Hunger Games controversy, then I’d be a fool not to talk about what one could make a strong case to be THE biggest film plagiarism issue of all time. Well, there’s that and having a couple of friends who actually wanted to hear an Ospreyshire track about the first anime series to be created and broadcast in color. One of those friends would be one of my college buddies Drew and the other is my Scottish mate Dave from ZAP Records himself.

For those of you who don’t know anything about this song or anime series, this involves Osamu Tezuka’s creation Jungle Emperor Leo AKA Kimba the White Lion. This was a manga made in 1950, but it got the anime treatment in 1965, so this is older than Speed Racer. Tezuka is also known for creating Astro Boy, Black Jack, Metropolis (no, not the German film), and Dororo which got remade last year. This story is about the life and adventures of a lion cub prince named Kimba (I’m going to refer to their English names from here on out). His goal is to have unity between the animals and the humans, but he has to take responsibility to lead his kingdom after his father Caesar (the original king) gets murdered and…

You know what? I don’t need to go further with a synopsis. 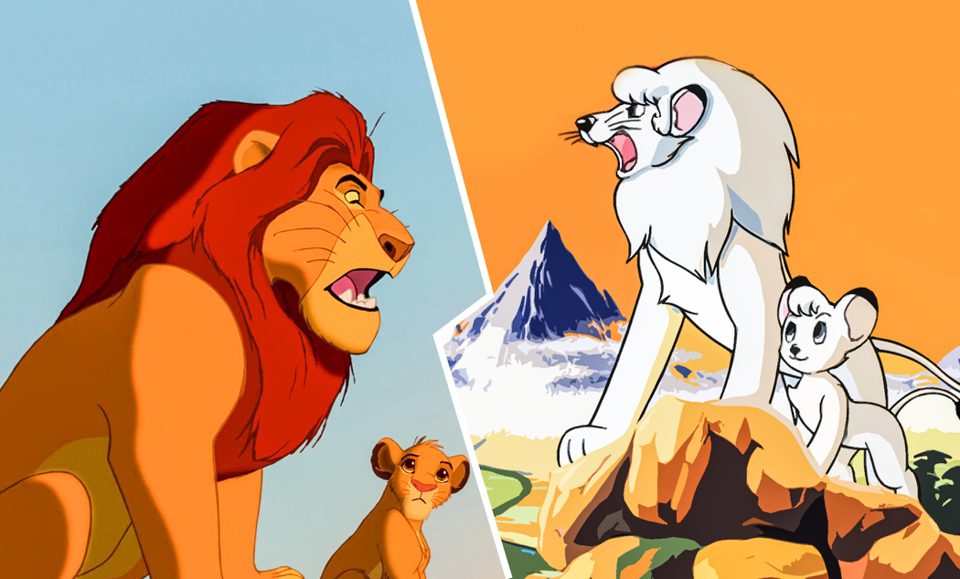 This shouldn’t surprise anyone. If you want to know my full thoughts on this issue, then check out my Lion King rant post I did last Summer. You can also check out my review of Kimba the White Lion on my other blog. If you really want to get in depth with this insane film plagiarism controversy, then check out this link. I don’t want to repeat myself too much here.

This is infuriating how Disney even to this day have never owned up to stealing most of it’s characters, storylines, and even scenes that were shot-for-shot from Tezuka’s work. The reasons why Tezuka Productions haven’t sued Mickey Mouse are because Osamu mentioned on his will not to burn bridges with Disney (context: he died in 1989 during production of The New Advantures of Kimba the White Lion which would be 5 years before The Lion King was released) and because they don’t have as much money to take them on in court. I disagree and they should’ve sued The House of Mouse. Disney even tried to block Jungle Emperor Leo 1997 from North America at the Fantasia Film Festival in Canada back in 1998, for crying out loud! Simba was originally going to be a white lion in pre-production. Roy E. Disney called Sarabi “Kimba’s mother” in the 1993 Prodigy Q&A Transcript which can be seen in one of the links above. They would have so many strong cases for copyright infringement. Here are examples of these various characters:

Comparisons from the first picture and this screencap:

Even The Simpsons made a joke involving this plagiarism controversy. Yes, that’s James Earl Jones doing all the voices in that scene!

Enough of me ranting here. I felt like I’ve done a bunch of it on two of my blogs already. Hahaha! Let’s talk about the music. This is actually the longest Ospreyshire song I ever written and recorded and has more instrumental layers than anything else. I had three different sounds from one keyboard, bass, acousmatics, African percussion instruments (fair trade, FTW!), and my little mbira. I felt so compelled to use both Swahili and Japanese lyrics which was a very nice touch and I wanted to be respectful to those cultures. The lyrics use a TON of Kimba and Lion King references. I won’t explain them all, but here are a few and the meanings therein.

“Father, I hear your voice in the Eastern sky. Mother, I hear you from the constellations.” This represents the death of both of Kimba’s parents. The Eastern sky also references an opening lyric in the Jungle Emperor Leo 1997 ending theme “Wind Song”. That and he sees the spirits of his dead parents in the sky in the original show (SOUND FAMILIAR?).

“…this human song” This references the Kimba song “Sing a Human Song” in the English dub.

“Saitama…Grimes” Those cities have major significance to Kimba. Saitama, Japan has a baseball team called the Seibu Lions who use that character as a mascot even to today. Grimes refers to a town in Iowa referring to Right Stuf and their anime distribution subsidiary Nozomi Entertainment who have the license to the original show.

Top Lion King potshots in my opinion in no particular order:

“Was she your sister or your cousin?” Who is Nala’s father? No Lion King fan has ever given me a straight answer on that issue, so I directly referenced that infamous incest theory in this song! Do the math.

“Your gods had no worries profiting and suing others for cultures they don’t own…” Three words: HAKUNA MATATA TRADEMARK!

“Have you found a way to punish without genocide by starvation?” This line calls out Mufasa’s severe protagonist centered morality of the Elephant Graveyard. Starving and isolating others is genocide. Just look at Shark Island in Namibia, the several Native American tribes who were subjugated by the pilgrims, and The Devil’s Punchbowl in Mississippi to name a few. Also, I have to give props to Croatian blogger Vigour of Film Lines for noticing that severe flaw of the Mufasa character and for calling the Elephant Graveyard a concentration camp, too!

I namedrop the title of my other song “They Dreamed of Devastation and Deceit” in the lyrics. It’s even more appropriate when you consider the subtitle is (Circle of Lies).

Lion King fans! I actually parody two songs from that movie franchise from a musicality standpoint. The intro should be obvious and the other parody aspect kicks in when I start singing halfway through the song. The first person who gets the answers right gets this song for free if they didn’t buy the album.

Hope you liked my somewhat lengthy backstory on that song. This concludes this song/poem trilogy.

The picture of The New Adventures of Kimba the White Lion is from Fandom and is property of Tezuka Productions.

The screenshot of Mufasa, Simba, Caesar, and Kimba is from Mashable and they are property of Disney, Tezuka Productions, and Nozomi Entertainment respectively.

The character comparison guide is from the Internet Archive. All characters are property of Tezuka Productions, Nozomi Entertainment, and Disney respectively.

The video clip is from The Simpsons and is property of Fox.

They project a utopia of either animals only or having those who look like them walk around or live there
Empire and golden states of minds dictate this false narrative
Assuming they’re not projecting and magnifying poverty, corruption, or war-torn areas
How ironic. Their people and certain others have been moving in

Cobalt, tin, oil, copper
Among numerous others are exploited
An unfair trade to make such an understatement of the decade.

They purposefully ignore smart apartments, luxury hotels, and even locales safer than (supposedly) more “civilized” nations.
Funny how they call themselves nations while others are called tribes
The artifice and constructs of foreign tongues beg to warp minds

A continent where genocides have been afflicted on them where their perpetrators walked off without being behind bars could only be ignored for so long
How tragic is it when all that’s being mailed back are whips, severed skulls from the natives, or maybe artwork when it’s not an empty and insincere apology

So many deluge themselves in the circle of lies to feel euphoric
As they don’t want those with melanin to exist (whether they admit it or not)
They want to see a continent full of strangers like them and only those who look like them
Whatever god they believe in or not, all of them should pray every day that those living there or scattered don’t think like them.

These history books have been silent about these matters. Who ever thought that autodidact endeavors would become useful for unlocking truth when some desire it regardless of the learner’s pigmentation?

While there are issues that can’t be ignored, there is also solace that cameras, books, or online channels don’t dare to show.